About Me - DR GHULAM YASEEN Ghulam Yaseen Studied Professional Homeopathy at Pakistan Homeopathic Medical College in Lahore Pakistan and has been practicing for the past thirty years, within those years out of seven years practicing, it was then that teaching became an integral part of life as 10 years at the Homeopathic college also known as Hameed Homeopathic Medical College in Lahore Pakistan, becoming a professor of Homeopathic Medicine gave many opportunities and insight for the learning experience as new symptoms and diseases appeared. It has become a vital part of who I am as a Doctor and Professor of Homeopathic Medicine to cure incurable diseases, not only specific disease but every kind of illnesses that disrupt the everyday life of each individual suffering from very serious cases.

Life threatening diseases and genetic cases appear to be a great challenge but are done so with care and complete thoroughness as it is a goal to cure each patient who needs medical attention, whether it is an aggressive disease or mild disease, everyone is treated for a cure and they are treated with the practice of Homeopathic Medicine of which more than several cases have been cured, which include but are not limited to Breast Cancer cases, Liver Cancer cases, Cerebral Palsy children, and to mention that Mongole babsies improved, giving the practice much confidence to take on challenging diseases so that no one is left to suffer.

During this time many lectures were presented throughout Pakistan, in both National and International Conferences, from the year 2000 to the present. As a result Gold Medals were received as well as Best Awards Shields for the Best Lectures Presentations. In the case of my own son in 2008, was diagnosed with pure Red Cell Aplasia that also became known as Johansson Blizzard Syndrome, a rare disease in the country of Pakistan. My son was declared incurable in many aspects but being a Physician and a father my interest in curing my son was of great importance so I took it upon myself to begin treatments and for the past six years he has now been cured, for the past nine to eleven months, he is stable and living his childhood life like normal children, lively and joyfully.

Therefore with many cases that patients are facing with the incurable diseases it has become a part of the Homeopathic practice of mine to find and treat those suffering from severe diseases of which many results have been through a cure to the disease. These special cases have been given a place in the practice to present at Medical Conferences with documented evidence of cures and medical findings and evidence.

The great confidence that was given when a cure was found through my treatment, leading to curing other diseases such as Cancer of various organs was a positive outcome; I decided to start free treatments for Blood Related Diseases of Children in January of 2010.

It has been four years now that many have been getting treatments, over five hundred and forty patients with different syndromes related to blood dyscracias are being treated throughout Pakistan. Within the timeframe that free treatments were given, many children have been cured within these four years, those that suffer from rare syndromes such as Bernard Soldier Syndrome, Glanzmans Thrombosthenia, Pure Red Cell Aplasia, Idiopathic Thrombocytopenic Purpura, Bleeding Disorder, (Factor V Deficiency), and Platelets Function Disorder to name a few. There have been other achievements in treating patients with Thalassemia Major, at least two hundred and seventy five patients have seen recovery and are no longer suffering from complications to their health, but are living healthy and normal lives with tremendous improvements in their bodily functions. Other diseases have been showing positive results, the Hemophilia cases have also shown exceptional improvements with Factor VIII levels improved.

To present day and 2 years presiding cases presented thus far include one cured case of Red Cell Aplasia, another is Road Traffic Accident Subdural Hygroma (RTA), and a case which had been undiagnosed by 5 departments of Allopath. These cases were presented with full documentation and medical evidences with reports documented through video footage and patient verbal reports, presentations of cured cases is the first ever to occur within the country of Pakistan. 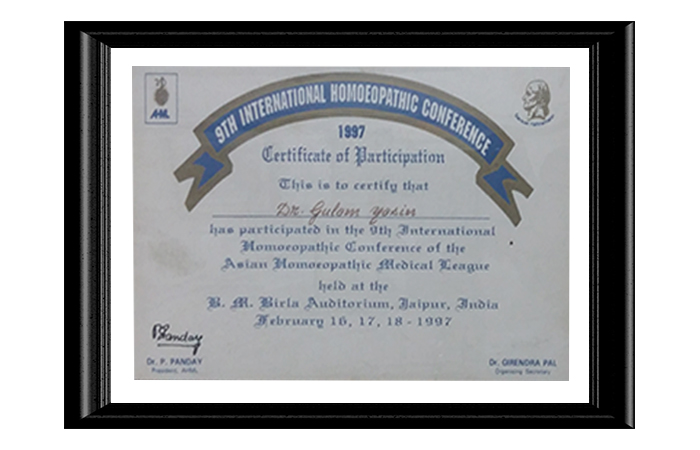